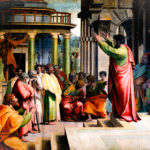 8:1 And Saul approved of his execution.

And there arose on that day a great persecution against the church in Jerusalem, and they were all scattered throughout the regions of Judea and Samaria, except the apostles. Devout men buried Stephen and made great lamentation over him. But Saul was ravaging the church, and entering house after house, he dragged off men and women and committed them to prison.

Now those who were scattered went about preaching the word. Philip went down to the city of Samaria and proclaimed to them the Christ. And the crowds with one accord paid attention to what was being said by Philip, when they heard him and saw the signs that he did. For unclean spirits, crying out with a loud voice, came out of many who had them, and many who were paralyzed or lame were healed. So there was much joy in that city.