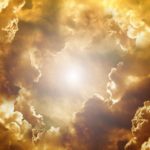 3 He is the radiance of the glory of God and the exact imprint of his nature, and he upholds the universe by the word of his power. After making purification for sins, he sat down at the right hand of the Majesty on high, 4 having become as much superior to angels as the name he has inherited is more excellent than theirs.

5 For to which of the angels did God ever say,

“You are my Son,
today I have begotten you”?

6 And again, when he brings the firstborn into the world, he says,

“Let all God’s angels worship him.”

7 Of the angels he says,

“He makes his angels winds,
and his ministers a flame of fire.”